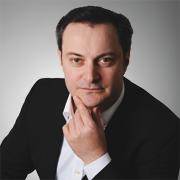 How did you get started in IT?

I was born in Ireland, and as I was growing up my oldest brother was the tech guy. He brought the first computer into our house, and I stayed in his bedroom and looked over his shoulder while he coded games. I was hooked, and I wrote and sold my first computer program when I was 11 years old. I got paid $200, and that was almost 30 years ago!

So I figured: “This is pretty cool! You can make things happen and create things!” It was very empowering. I later had a chance to work with my brother for a while when he started a small computer company, and then I had the opportunity to come to America in the late 90’s.

When I got here, technology was on fire—everyone was investing in new equipment and preparing to avoid the potential Y2K disaster. I got a great job in Fort Lauderdale in Coopers & Lybrand, which later merged and became Pricewaterhouse Coopers. It was a huge company, and there were many tech opportunities there.

One day, I was at an all-hands meeting for IT at the organization where our CIO said: “The future is going to be in software development. Not in running data centers or any of the stuff that could be outsourced.” That was pretty prophetic back in the late 90’s!

And she was spot on, so I found an opportunity as a senior manager of a large software engineering group, and later became the IT innovations director for PWC. Through that work I learned to discover new technology, and to align new technology with the business process.

After a few years, all my friends and colleagues at the job said: “We know you, we know what you do and how you think—you have to go to Silicon Valley and be in the heart of the action.” I listened and thought: “That’s cool, but I have a house and am happy here in Florida.” Well, eventually I sold everything, jumped on a plane, came to California, and became the CIO of O’Reilly Media. For me it was a nice hybrid—a company that was IT-focused, but also cutting edge in terms of their thought leadership. I worked there for years before, all of a sudden, I got the biggest surprise of my life—I got a call to be the CIO of the City of Palo Alto!

I have to say when I got the call I wasn’t necessarily wild and open-minded about it. My first inclination was: “I can’t do government! I’m a maverick, I break all the rules and like to move fast!” But I accepted the offer and I’ve been doing it for a few years now. It’s been a great surprise and really, really rewarding— impacting lives every day, and trying to change the game in government.

Was there a specific point in you career where you knew: “I want to be on the leadership side of IT,” rather than stay in software and the technical side?

When I look at my whole life—whether my participation in the scouting movement, or other youth groups and teams—for whatever reason I’ve always floated to the top. So part of it is a natural inclination towards leadership.

But on the other side of the coin—I like to have more say in my destiny, the destiny of my team, and the destiny of my solution. I’m not a person who necessarily wants to be given tasks and told to do these things. I want to have participation in the decision making process.

So when I see somebody above me who makes decisions that I’d like to make, I think: “How come they get to assign the budget and make the final decision? I want to be that person!”

But it’s not a power thing in terms of boosting my ego. It’s more from the perspective of: “I want that because I think I can do good things with it. I can make a good, valuable contribution to that role.” And that has always encouraged me to work hard to be that person, and to get noticed, and to get the promotion.

What is your general leadership philosophy, and what skills do you think are important to develop as a leader—both to succeed in your own role, and to take responsibility for your team?

Well I’ll say from the outset—my leadership skills are a work in progress! I learn everyday. There’s no part of me that thinks: “I’ve got this!” No, it’s: “Wow… I could have done that better.” And I feel that more as my responsibilities grow, and as the impact of what I do grows.

As you become more senior you’ve got to get closer to perfection. As the scope of your leadership grows you’re challenged more in how you do things, and how you think about things. So one important leadership quality is recognizing that every time you do something, you can improve on it.

If you make sure your people are engaged and doing the work they are good at—and acting if they are not good at it—you get success as a leader because your people will deliver. I make sure my people have the tools, the skills, and the environment they need to be successful. My people are the top priority of my job.

Is it just a matter of making the time available, or do you take a specific approach towards empowering your people?

It has to be deliberate. Every moment of the day you make choices about how you spend your time. And if I’m faced with two important things, and if one of them is a staff member—they need a tool, or training, or they need to talk about an issue—then I deal with the staff issue first, because that will help with whatever else I’m dealing with.

You can’t say: “People are important!” and then book your calendar with 90% vendor meetings. You’re not putting your money where your mouth is. Your calendar should reflect where your philosophy is. If you look at my calendar it’s all over the place, but I put aside the time for my people. It’s probably where I spend the most amount of my time.

What are the biggest challenges you’re seeing IT people face today—both within your team and more generally?

IT leaders definitely face competition in the hiring marketplace. There are roles I can’t fill. I know other CIOs and colleagues who have roles open for 6,7, 8 months and things just aren’t getting done. It’s a real problem you can put your finger on and it impacts everything. So I’d say there’s a real war on talent.

There is also a speed to what’s happening today that’s catching us all off guard.

We all recognize that mobile is important so we’re putting emphasis on it. Then everyone says “Mobile is important, but so is data.” Now we start focusing on data— data analytics, data visualization. So we focus on that, and then it’s: “Now you have to move all your systems to the cloud.” We’re chasing after things and nobody’s keeping up. This has major repercussions and we’re all grappling with it. How do you ensure that your team has skills and can also anticipate and train for new technologies?

So, those are some of the holistic things I’m seeing and experiencing in the marketplace.

But about 40% is different. There’s a political environment where you have elected officials you have to make sure are kept happy. and you have to address constituent concerns. Also— people traditionally come to the public sector with the belief it’s a job for life. They come thinking that the needs and challenges are not as complex as in the private sector, and I think there’s some truth to that historically. But I don’t think there’s truth to that today.

The net effect of all that is—you have maybe an older, more comfortable IT staff who joined 10-15 years ago who planned to stay there until they retire. And now they’re faced with private-sector dilemmas. They need to retool, they need to step up. Performance needs to be higher than they experienced in the past.

So my day-to-day challenge is a gradual evolution of our culture from one that is old world public sector to one which is new world private sector oriented. And it’s hard!

What are the most important skills for IT success right now—especially for someone trying to advance to a leadership position?

As an aspiring IT leader you better understand your business. You can’t think of IT as a back office below-the-radar function anymore. Everything is tech today. No matter what field you’re in— whether you’re in farming, banking, insurance, government—tech is front and center.

I was in publishing for a few years. I didn’t realize how specialized it would be. I thought “Oh I’ll run a data center, I’ll run email, I’ll help projects that deliver stuff to the customer.” But that wasn’t enough! You gotta know the history of whatever your business is and what it means. What are the drivers? Who are the players?

So know the business and know it well— as well as the CEO, or the COO, or the CFO. You’re one of the leaders and you need to be as aware as them and contribute as a full participant at that leadership level.

I also think you must broaden your skill set. I’ve pulled cable; I’ve crimped coax cable. I’ve programmed, I’ve done network administration, I’ve deployed computers. I think I’ve done every job in IT over the last 25 years! And that means I can sit in on any meeting that has a tech component to it, and I can sit in on any meeting with any vendor, and I’ve had some exposure to the topic.

And the last skill—you have to be a great communicator.

Communication is both listening and talking. When you meet with customers, or business leaders, or your colleagues— you better be sitting there listening. Outlining notes, showing some good listening skills and speaking skills. And as a leader you also have to get up in front of audiences and talk about ideas. You have to be able to convince people of your ideas.

There’s not a lot of really successful leaders who either talk poorly or write poorly. It’s just something you don’t see. That suggests something to me: if you’re not good at composing an email that convinces people to make a decision, or to be part of something you need, or if you can’t stand in front of your team or a large group and get them excited about something—you should work on that.

If you started your career over tomorrow, what would you do differently?

I would probably try to progress a little faster. I stayed too long in some roles. I wasn’t bold enough. I think most of us are a little afraid when we’re younger.

So while I’m very, very grateful for everything I’ve experienced in my career and I love what I do right now, I do think—“Maybe I should have had this role a few years ago because I should have grown a bit faster.”

Want More?
Join the 1000’s of successful IT Pros who receive
our EXCLUSIVE tips, tools and insights
focused solely on empowering
the PRO side of being an IT Pro, and…
Subscribe now and get a FREE copy of our book:
The 11 Secrets of Highly Influential IT Leaders.