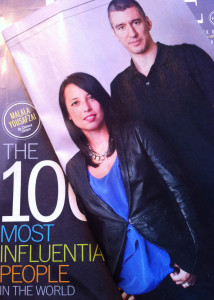 Our favorite techies of the Time
“Influential 100”

What an exciting time in technology! The Time magazine annual “100 Most Influential People in the World” issue is out, and tech is well-represented. But, as far as we’re concerned, these two are #1: True IT heroes.

Erica Kochi and Christopher Fabian co-founded and co-lead UNICEF’s Innovation Unit. Created in 2007, The Unit is dedicated to finding ways to improve the lives of the most under-resourced young people in the world, with the intelligent application of technology.

Both Kochi and Fabian have eclectic backgrounds. Mr. Fabian received his BA in Philosophy from The American University in Cairo and his MA, just this past year, in Communications and Media Studies from The New School in New York. Ms. Kochi has a BA in Economics and Japanese from the School of Oriental and African Studies at the University of London. Ms. Kochi has spent almost all of her career at the UN, while Mr. Fabian spent four years founding startups in Egypt and Tanzania before joining UNICEF.

What a text message can do

One of The Innovation Unit’s most important contributions has been core development on RapidSMS, which extends Django to communicate

with SMS, massively expanding the uses of simple texting devices.

RapidSMS is the tech that, combined with pre-existing wide access to basic cell phones in Africa, allows Nigerians to register children’s birth with the government via text message. Officially registered children are more likely to receive vaccinations, education and other important services, leading to a lifetime of improved chances. A similar program is now launching in Kosovo to document the over 8% of unregistered children there.

The Innovation Unit’s portfolio of projects is extensive

Again utilizing RapidSMS, Rapid Family Tracing and Reunification has been deployed in Haiti and Uganda to speed the return of children separated from their families in “rapid onset” emergencies. It began as a student project in the Design for UNICEF class at NYU, led by Fabian, Kochi and Professor Clay Shirky. The UN is making this open source technology available to all humanitarian organizations working in this field. There is potential for it to be adapted to more broadly serve vulnerable children in a variety of settings, including those living on the street or in residential care.

In Zambia and Malawi, Project Mwana has used RapidSMS to reduce the time for transmitting newborn HIV test results to rural health facilities from 66 to 16 days. The sooner infected infants are identified and treated, the greater their chances of survival. Lessons learned from, and code created for, this project will provide the basis for further mobile health initiatives.

The Ureport project allows Ugandan youth to use RapidSMS to send information, feedback and requests to officials, answer poll questions and receive information. More than half of Ugandans are under 18, making this a particularly important group to involve in shaping the country. Ureport enables an exchange of information that empowers “Ureporters” to participate in, and affect, their communities on an unprecedented scale. 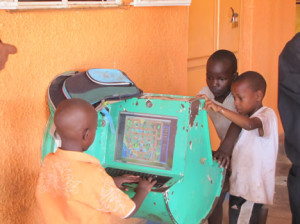 Another Innovation Unit creation is the Digital Drum, named a top 50 invention by Time magazine in 2011. These are rugged, solar-powered computers embedded in oil drums. Pre-loaded with educational resources, they are kiosks for rural Ugandans previously without access to health-related and other information.

Scalability, local sustainability and open source are keys to success

Kochi encourages us to plan for the wild, not just the lab. “People often fall into the trap of designing the perfect pilot, where you can control every aspect, and have a perfect outcome. The reality is, unless you’re designing for the messiness of scale, from the outset, the chances are that the solution you’re building for won’t make it to scale.” Kochi is also very focused on sustainability, with an emphasis on working with local software developers, designers and project managers that will still be around long after overseas consultants would have gone home. And “everything we build is open source. If you really want to see scale and adaptability and re-customization in ways you couldn’t even imagine, openness is key.”

Learning from failure: “Everything we’ve ever built in New York has failed”

Ms. Kochi speaks about her approach to “Making Small Things Big” in a video just released by the Stanford School of Medicine. Her mantra: “build for your user – simple &amp; cheap.” “Everything we’ve ever built in New York has failed. So when we do build things, we go to to the field and we work directly with the end users.” She continues, “Technology is only 5% of the solution. The reason that UReport in Uganda is such an incredible revolution in mobile health is not because you have all of these text messages appearing on a Google map. It’s because this information is linked directly to action from the government. Governments use this to make strategies, implement strategies and to change strategies, in real time. That’s what’s impactful.”

“We have a failure Friday, every Friday!” says Mr. Fabian. “We fail a lot. RapidSMS failed 50 times before it worked. We fail quickly, we fail cheaply and we share that failure. Across the board, what we have learned from [failure] is that we have to design programs with people who are using them.”

Relevancy: the #1 thing for influence

Wow, even their failures are inspirational. But is inspiration enough to also rank as influential?

It is because they went beyond being inspiring, innovative and persistent that they are influential. They made technology relevant, in the most profound way, to masses of people. Their influence comes from using technology to solve problems that people really need solved, and they make accessing the solution easy.

Take a look around. How can you make technology more relevant? How can you have the influence you want, at work and in the world, by creatively solving problems with what you know how to do best?

If you’re interested in getting involved with The Innovation Unit, they invite participation ranging from comments to major partnerships: http://unicefinnovation.org/get-involved.