Retaining top talent can be a real problem for IT managers.

While employees in other industries may hold onto recession-era concerns about leaving their job and not finding another, IT professionals have little fear of unemployment.

In the greater Atlanta area, where we have an office, the IT unemployment rate is less than 2%. As Lee Congdon, the CIO of Red Hat, Inc., explains, “There aren’t as many qualified candidates as there used to be, and qualified candidates have multiple offers by the time they get to the altar.”

IT’s retention problem is bad, and it’s getting worse.

To succeed as an IT manager, you need to solve it.

Here’s a solution one of our consultants observed while working with some of IT’s most involved leaders.

A Good Manager’s Hard to Leave

I first saw this solution practiced by a C-level IT leader I had the pleasure of working with. He was one of the most effective managers, and retainers of talent, I ever saw.

But he didn’t win his people over with expensive benefits programs.

And he didn’t retain his people by implementing cutting-edge HR practices.

Instead, he cultivated close presence-based relationships with his people, rooted in regular, informal face-to-face meetings. With me, specifically, we shared lunch together every two weeks, which strengthened our relationship and my commitment to his goals.

I stayed much longer than I intended in this company and found it very hard to eventually leave, largely because of my relationship with him.

I struggled with stepping away, simply because I knew my manager, and he knew me.

A Common Thread—Backed by Research

All of the most effective retainers of IT talent I’ve observed have followed a similar practice.

They have all cultivated presence-based relationships with their people—and their people have all cited this as one of their main reasons for sticking around.

The research on retention tells the same story:

What isn’t always so simple is how to initiate presence-based relationships with your people in the first place.

An Open Door Is Not Enough

This is a real sticking point for many IT managers.

Even this IT leader whom I shared a regular lunch with—who was so effective at cultivating presence-based relationships—experienced difficulty initiating them. He often told me, “I leave my door open—I don’t know why more people don’t come into my office to bring an idea, or a solution, or even just to say hi.”

He failed to see the kernel of this problem: Yes, he left his door open, but few of his people saw this open door as an invitation.

There were two big reasons for this:

The net of it?

Only a few of his people ever walked through his open door and introduced themselves.

Are You Repeating His Mistake?

Now, this IT leader isn’t the first person to make this mistake, and he won’t be the last.

Many IT managers—especially senior IT managers—forget that an open door is not enough. In fact, if you are an IT manager, you probably assume that if your people want to develop a presence-based relationship with you, they will come over and say hi.

But it just doesn’t work that way.

It doesn’t matter what level of the management structure you are at—if you manage people, they will feel intimidated by you, to one degree or another, just because of your title.

And even if you leave the door open and tell people to come in, you still can’t assume your people have the soft skills and confidence to take you up on your offer.

If you want to enjoy the retention and engagement benefits of cultivating presence-based relationships with your people, you have to be the one to initiate these relationships.

First: If You Don’t Need to Be in Your Office, Stay Out of Your Office

The easiest way to meet face-to-face with your people is to leave your office as often as you can.

As a busy manager who can’t set aside significant blocks of formal time every day to shake hands, that means you have to take advantage of the free time already in your schedule—namely, all those little breaks you take to get some water, to drink coffee, or to eat lunch.

Rather than grabbing your coffee and then taking it back to your office and drinking it alone, linger by the coffeemaker. Walk the halls and greet whomever you run into. Ask them their name, and what they do. Make a note of who they are when you return to your office (so you don’t ask the same person the same question next time), but overall stay informal.

Don’t stress too much about over-scheduling this habit. It isn’t about having a set time of the day, every day, that you’ll be by the coffeemaker. Instead, it’s about making yourself:

So keep your walks light, open, informal, and focused on connecting with your average team member.

Save the real effort of deeply connecting for your highest-performing team members—the people you really don’t want to lose.

Walking the halls is a good way to be “known” around your office.

But you certainly have team members you want to develop deeper relationships with.

I’m not talking about that analyst who’s going to be gone in six months.

I’m talking about the members of your extended leadership team whom you want to keep around for many years, the people you might groom for higher positions—your “High Performance,” or HiPo, team members.

For your HiPos, saying hi as you pass them in the halls isn’t enough to open a compelling relationship with them. To really initiate a presence-based relationship—one that will give them pause the next time they receive an external offer—you need to give them special attention.

You need to set aside regular, dedicated time to connect with your HiPos.

This time doesn’t have to appear daily: You can open up a relationship with your HiPos by meeting with them once a week, or even once a month.

Here’s how a few top IT leaders open up relationships with their top performers:

Now, I’m not saying you have to set up a weekly webcast for your whole company. And you don’t need to invite your extended leadership team over to family dinner once a week. But if you want to open and cultivate relationships with your organization’s rising stars, you do need to apply a similarly disciplined approach towards creating a relaxed environment to connect with them.

Third: Host Your Own “Coffee with the CIO”

Recently, working with a C-level client, I set up an event for him called “Coffee with the CIO”. It’s efficiently transformed how he relates to his extended team of HiPos.

For this event, we scheduled 30 minutes once a month to host a short, informal coffee meeting between this IT leader and 5 to 15 HiPos in his organization that he didn’t already have a relationship with. (To identify these people, he asked his direct reports for a list of team members who were highest-performing and had potential to continue to grow in the organization.)

The event had no agenda. Everyone talked about normal things—hobbies, families, vacation plans. The event’s goal was to create space for people to get to know each other on a human level.

I know, it doesn’t sound like much. But I saw the pictures from this client’s last “Coffee with the CIO” session and it was amazing to look at the smiling faces in the room. You could see how happy these effective IT leaders were to break bread with their leader.

And all it took was 30 minutes, once a month.

Most Important: Play the Long Game

Of course, like a 2-minute chat by the water-cooler, a single 30-minute coffee won’t be enough to develop a lasting connection that will prevent your best people from leaving.

But when you initiate an informal relationship with your high-potential people, you create the foundation for a deeper connection with them. And after you set this foundation, you will naturally begin to schedule face-to-face lunches, one-to-one coffee breaks, and maybe even get-togethers at your house with your organization’s most indispensable talent.

These little moments add up.

And when that day comes—the day your new direct report receives an offer from a competing firm—she will remember all of those little moments. And when she remembers them, she will think twice about leaving, for a catalogue of reasons that seemed inconsequential—to you, and her—at the time. 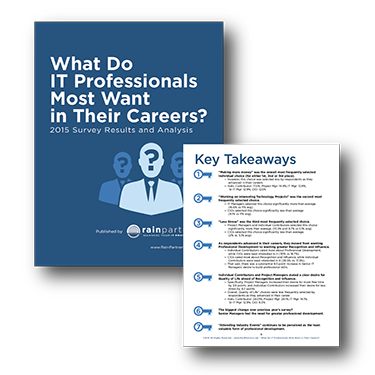 If you want to jump-start your engagement efforts, grab our new report “What IT Pros Most Want”. It goes deep into this question of what your people really want from their careers. Give them that, and they’ll never leave.